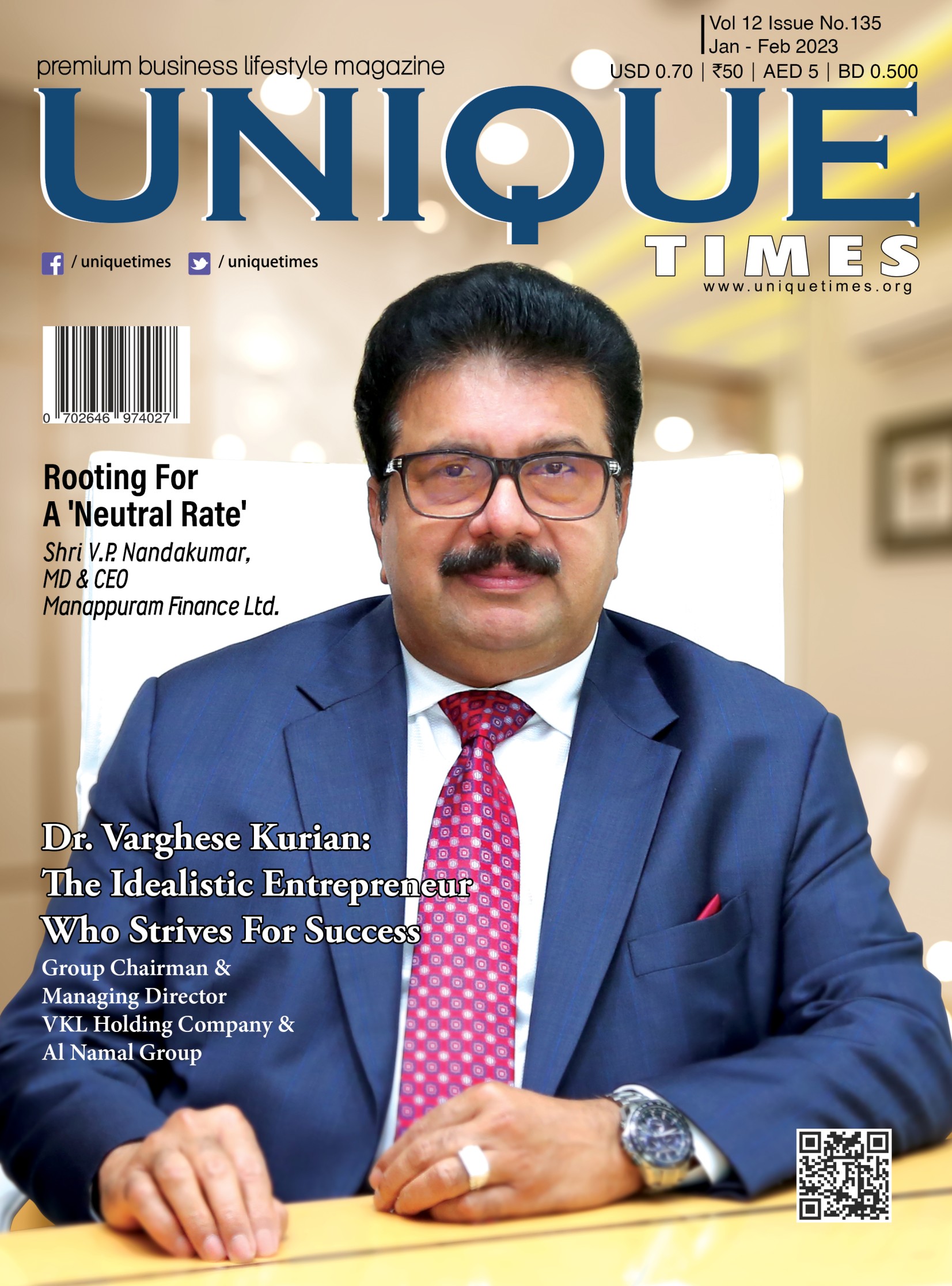 Every success story is a tale of constant adaption, revision and change – Richard Branson

Success is much more than wealth, influence, or notoriety. Success is just the satisfaction and happiness one feels after adopting a certain lifestyle or engaging in a certain activity. Only with intense effort and a tiny bit of luck can success in any endeavour or area of life be attained. Determination is one of the most essential success ingredients and may even be the most essential success secret. Never giving up until the goal of happiness and contentment in life is fully attained is vital for success. Diverse people find enjoyment and contentment in quite different things.

Dr. Varghese Kurian the chairman of the VKL Holdings and Al Namal Group of Companies, which employs more than 7000 people. The group’s businesses include real estate, property development and management, construction, health, and hospitality. Since 1990, Dr. Varghese Kurian has been actively involved in real estate development. He has successfully created, managed, marketed, and sold more than 200 commercial and residential structures worth more than BHD 500 million throughout the Kingdom of Bahrain.

The classic Benjamin Franklin quote, “Energy and tenacity conquer all things,” is often used. Dr. Varghese Kurian performed just this when he 2011 saw the expansion of his empire even as Bahrain was in danger of disintegrating.

The Group finished the Best Western Olive, Al Murooj, Lulu Hypermarket in Hidd, and Middle East Hospital projects despite the upheaval brought on by the heightened civil unrest.

The Group was able to complete projects for a significant discount thanks to decreased costs for raw materials, lower subcontractor rates, and a drop in the demand for building supplies. They had more confidence in Bahrain, which allowed them to extend their holdings.

The real estate, property development and management, construction, health, and hospitality sectors of VKL Holdings and the Al Namal Group of Companies are quite well known. VKL Holdings has carved itself a distinct niche in and around the Kingdom of Bahrain by utilising the most cutting-edge methods across all of its multiple divisions.

His journey to greatness began in Bahrain in the 1980s when he arrived as a civil engineer. Dr. Varghese Kurian worked for a construction firm up until 1992 when he founded the VKL Al-Namal Group, a construction and real estate business. The company initially started out as just another construction firm, but it gradually grew into one of the largest firms, with facilities on-site for electromechanical, HVAC, interiors, aluminium, and wrought iron work, which helped to complete some of the significant projects that proved to be turning points for the business. In Bahrain today, this group has proven to be the greatest in its industry. More than 7000 people are employed by VKL Al-Namal Group, which has expanded beyond just real estate and construction. These activities include trading, oil and gas, trading, marine dredging, and education.

Dr. Varghese Kurian credits it to a top-notch group of trustworthy, detail-oriented experts who share the organization’s commitment to sustainable growth and who persevere with the highest humility. Dr. Varghese Kurian is still amused and appreciative when he considers how he came to diversify his business portfolio.

In addition to being a prosperous businessman, Dr. Varghese Kurian embodies humanity by staying true to his roots even when things are difficult. He is a man of humility who, although having amassed a sizable empire, makes sure to constantly uphold his obligation in striving to benefit society in addition to his economic objectives. As part of the business’s CSR drive, he gave Rs. 8 crores to flood relief programmes in Kerala, of which Rs. 2 crore went to the Chief Ministers’ Relief Fund. In addition, VKL Group did not hesitate to offer assistance to flood victims in Kuttanadu by supplying necessities like food and clothing. In his hometown of Seethathodu, which is close to Pathanamthitta, he rebuilt more than 500 destroyed homes and provided home appliances to more than 6000 homes. His social contribution goes beyond CSR initiatives; it also includes providing medical and financial aid to those in need, funding impoverished people’s weddings, and other charitable tasks that he completes all year long. Additionally, he has donated money to cover Indian expat children’s wedding costs. He also started a philanthropic organisation in his parents’ names to support poor people’s welfare initiatives.

Dr. Varghese Kurian is passionate about testing out cutting-edge concepts in the tourism sector. He makes excellent investments without hesitation, and industrialists like him are uncommon. VKL had already invested in the ambitious seaplane project, which unhappily ran into administrative roadblocks and dashed Kurian’s hopes. But still he remains optimistic, nevertheless, about the vast potential that seaplanes can have for the travel and tourism sector. He thinks Kerala’s varied landscape has the opportunity for such a project.

Through his involvement with numerous notable organisations, Kurian has gained recognition throughout the world. He was honoured by the Indian government by receiving the highly coveted Pravasi Bharatiya Samman for 2014. In addition, he has received numerous awards, including the Global Visionary Award. Without a doubt, one might conclude that this individual leaves his trail open for others to follow. On January 16, 2023, he received the coveted MBA Award in recognition of both his contributions to the business world and his CSR activities.

Dr. Varghese Kurian and his wife, Lizhy Varghese, a multifaceted homemaker and the backbone of the family, ensure that their three children – Sija, Jeeban and Vishakh have a knowledge of humanity and its truths.

Dr. Varghese Kurian states, “From a small beginning as a single construction company, we have achieved our current strong position in the market by travelling a road less taken, providing to you the best the industry has to offer without compromising on quality.”