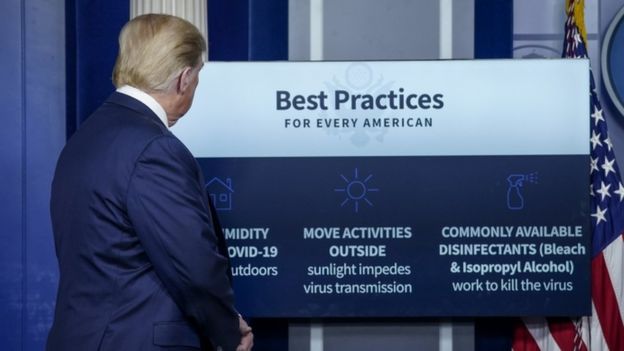 United States President Donald Trump has been criticised for his question whether disinfectant may be injected into body to eliminate Covid-19.

Many medical experts – both inside the US and across the world – have come out strongly against the president for his irresponsible remark.

He has also enquired at a meeting with medical professionals whether UV light may be used to disinfect people.

Both ideas have been dismissed by the medical community based inside the country as well as across the world.

Sunlight and disinfectant are known to kill the infection. But, both cannot be used in the way the President has suggested.

The irresponsible suggestions made by the President exposed his lack of awareness about the seriousness of the situation.

It is high time to evaluate how the world leaders respond to the crisis emerged due to the Covid-19 outbreak.

The US is about to witness a Presidential Election in early November. People of the country should think twice before they make their choice next time.

The US is one of the worst affected countries in the globe. It has suffered several serious loses due to the crisis.