Trump warns he may send army to quell protest 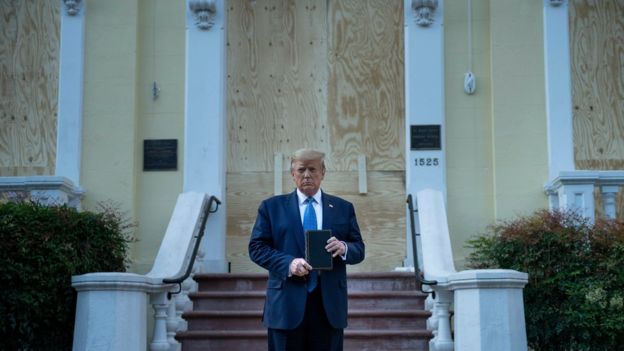 United States President Donald Trump has warned that he might send in the military to quell growing civil unrest in the country over the custodial death of a black man.

His statement is seen as a provocation by many. He is accused of misusing the opportunity to make political gains.

The protest, which begun several days ago, has spread to many states across the country such as New York and even Washington.

Recently, the protesters gathered near a venue in which the president appeared to address a team of media personals.

He even visited the church which was damaged by the protesters.

Many see this as an attempt to divert the issue towards a political angle favorable for his political mileage in the upcoming Presidential Election.

Anyway, the protest to express the anger against the custodial death has entered the seventh day. The protesters have violated all restrictions imposed by the country for the good of its people.

Several states have imposed severe measures to quell the protest emerged immediately after the information about the death had been publicised.

The United State is at present in a difficult juncture. If the government uses harsh measures against the protesters, it may lead to a serious disaster and is against the democratic values for which the country stands.