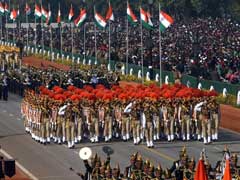 As the country is celebrating the Republic day, the authorities has beefed up the security precautions in the various cities. Reports say that the cops are extremely vigilant to shatter all kind of threat. Drones are said to be a potential threat to the security forces, report added.  The capital region will be totally under the control of the security officials. French President Francois Hollande will be the Special Guest in the Republic day ceremony in Delhi. Earlier, there were reports about the presence of some dangerous terrorist personalities in the national capital. Recently, the police authorities had nabbed a couple of youngsters who were reportedly planning an attack on the country. The country had last day announced a high alert in the capital for the smooth functioning of the most-special celebration.   The military groups will display their might at Rajpath in the national capital, where President and the special guests will be the spectators of the performance. As the President of India, President Pranab Mukherjee is considered as the Chief Commander of the Defence Force in the country, according to the constitution.  President, Prime Minister Narendra Modi, Special Guest Hollande, Vice-President Hamind Ansari and several VVIPs will witness the defence force’s Parade and strength-performance in the historical path. Similar celebrations will be held at different cities across the country. PM Modi, though a micro-blogging site, wished Republic Day greetings to the people of India. He expressed special thanks to Dr. Ambedkar, who was the chairman of Constitution’s drafting committee.