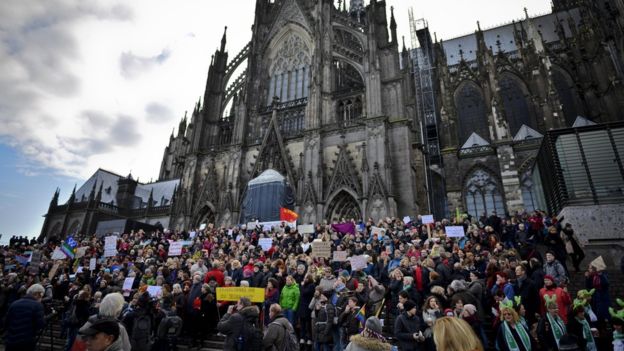 On the wake of growing social insecurity due to the increased migrant-crime rate, the oppositions along with far-rightist groups are prompting the German government to reconsider its controversial migrant policy. A report submitted by the Cologne police about the New Year’s night attacks, in which several groups of migrants sexually assaulted and robbed the German women, has clearly indicated the depth of the migrant crimes. Media reported that the detailed police report on the attack was recently submitted to the ruling government. It seems that the government may consider strict-action against the perpetrators of the New Year Eve attack. Meanwhile, the local citizens had reportedly done a revenge attack on the migrant’s on Sunday that left around eleven foreigners badly injured. The top government officials last day condemned the attacks and called for a peaceful coexistence. However, experts claim that the attacks had widened the gap between the migrants and the local citizens. The social insecurity is filling scepticism around the Germans migrant policy, which was initially considered as a bold step, he added. The ‘Alternative for Germany’ party had last day criticised the German Chancellor Angela Merkel for her policy. Pointing the recent attacks, the conservative party had earlier demanded that the country should stop further migrant-influx. Last day, on the eastern city, around thousand protesters took the street to express their anger over the attacks. Reports say that they raised anti-muslim slogans against the migrants in the country. They also raised slogans against the ruling conservative government and the chancellor.