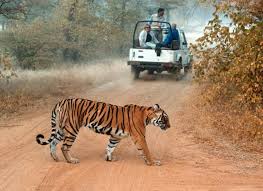 In a sensational verdict by the Supreme Court of India, it last day clarified that the development projects should not be blindly blocked by the environmental activists in the name of conserving tigers. Meanwhile, it assures that the conservation of tigers is a very important matter and serious measures should be taken for the purpose. While delivering the verdict, the court blamed the NGO, which filed a petition against the Nagpur-Jabalpur highway. The petition alleged that the widening of the highway would disturb the ecosystem of the tigers in the Peach tiger reserve as the proposed road is passing through the tiger’s migrant route. Earlier, the National Green Tribunal passed an order against the development project. But, in contrary to the NGT verdict, the Bombay HC approved the National Highways Authority of India’s widening plan.

Later, the NGO approached the Supreme Court of India for the clarity in the verdict. Subsequently, the SC upheld the High Court verdict, and announced that HC is the right forum to judge the developmental issues.  The controversial verdict was announced by the bench of Justice TS Thakur, R Banumathi, and AK Sikri. Surprisingly, the bench reminded that it is not the first time a highway is passing through a reserve forest. It advised the NGO’s to file a PIL against the uncontrollable poaching. However, the court directed the authorities to protect the migrant route of the tigers. Meanwhile, Attorney general informed the Supreme Court of India that the authorities had taken all the proper steps to protect the migration routes of tigers.