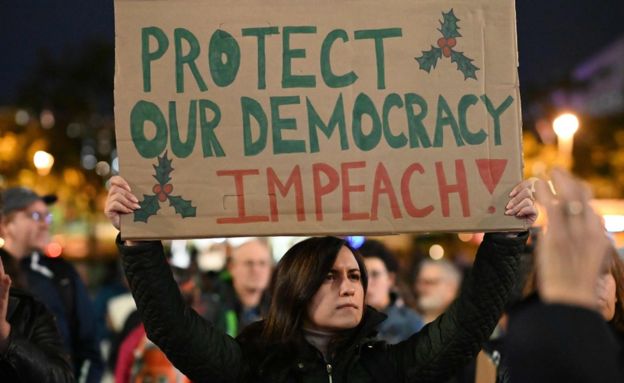 US President Donald Trump has been impeached by the country’s House of Representatives, paving the way for the launching of a trial in the country’s Senate to decide whether he should remain in the officer or not.

Unsurprisingly, in the Democrats dominated House of Representatives, almost all Democrats have voted against the president. As expected, all Republicans have stood with the president.

Unlike the House of Representatives, the US Senate is dominated by the Republicans. It is less likely that the Senate will take a stand against the president.

For the removal of the president from the office, the support of at least two-third of the members of the Senate is required.

As the Democrats does not even have a majority in the Senate, the matter of the two-third majority is out of question.

The White House has expressed confidence in the capacity of Donald Trump to overcome the challenge posed by the impeachment move. The president’s office said Mr. Trump would overcome the crisis.

The president was addressing a campaign rally in Michigan when the US House of Representatives has voted to impeach him.

With the impeachment, Mr. Trump has become the third US president in the history of the country to be impeached by the House of Representatives.